Class 67 locomotives are a class of Bo-Bo diesel-electric locomotives which were built for the English Welsh & Scottish Railway (EWS) between 1999 and 2000 by Alstom at Meinfesa in Valencia, Spain with drive components (engine, generator and traction motors) from General Motors’ Electro-Motive Division.The bodyshell is a monocoque load bearing Alstom design, the bogies are an “H” frame Alstom design, the engine, traction motors and control electronics are GM-EMD products, and the same as used in the Class 66. Unlike the Class 66, the traction motors are frame mounted rather than axle hung to reduce unsprung mass and the gear ratio is increased allowing higher speeds. The cab design has a central driving position.The locomotives are able to supply Electric Train Supply for passenger train heating and air-conditioning, and are equipped for buffer and screw coupling and also coupling via a buckeye coupler attached on a swing arm mount.Initially the class were used primarily on mail trains. In June 2003 EWS lost the Royal Mail mail train contract, with services diminishing to complete cessation in March 2004.The locomotives have since been used by First ScotRail on the Caledonian Sleeper on non-electrified lines north of Edinburgh. In April 2015, GB Railfreight commenced a contract to haul the Caledonian Sleeper with 67004 repainted and renamed for use on the service. When GB Railfreight started to provide the trains and crews for the Serco franchise in 2015, it was planned to use rebuilt Class 73/9s.The first of these came into service in February 2016. But the Class 67s continued to be used on some services for another couple of years.Class 67s are also used as Thunderbird rescue locomotives, for failed trains on the East Coast Main Line, on some freight trains, and for use on chartered tourist trains. Two locomotives were assigned to, and received special liveries for use with the Royal Train from 2003, and a third had a commemorative jubilee livery applied for use with the Royal Train during the Diamond Jubilee of Elizabeth II in 2012. Wearing the DB Schenker silver livery Royal Diamond continues to be in service to this day. 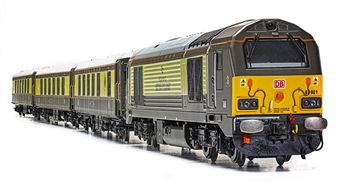